An app mockup clearly presents what your app looks or works like. It is an important step to make your app developer understand what you want in these apps. If you successfully design the app mockup, developing the application will be easier. It is a screen by screen presentation of your applications along with buttons and content. An android app development company includes this step to ensure that the development process goes smoothly. It also helps you understand your application better.

App mockup allows you to translate your app idea into reality. You can even check how your app will look in screen-to-screen layout. Hire an experienced company for your applications. App mock can be designed by you or by your app developer. Whatever the scenario will be, it must be done professionally.

An app developer designs a mockup, imagining how a user uses your application. It explains the app idea correctly. Sometimes, business owners make mistakes while designing an app mockup. Hire an experienced Android App Development Company for designing your application.

Your mockup includes every screen your app will have. If it skips a screen, it is not considered to be complete. Even though the background screen is the same, any change on it needs a separate screen. You need a confirmation screen after log in, the reset password screen, terms and conditions screens, and more. So, do not miss a single1 screen while designing your application.

Mistakes 2: Adding buttons that do not lead anywhere:

Make sure that everything is connected in a logical way. Do not include things in your mockup which don’t include in your app. Every button must be added to a screen logically.

You need to think from a user’s point of view. Understand the logical presentation of your application. If you find a screen that you cannot reach, you need to add a button to access it. All these are important steps for your mobile app development.

If your mockup includes screens from where you cannot navigate away, they are sticky screens. You can add a button to leave the screen. You think more than a back button on your screen. Do not make your screen too cluttered.

You must give numbers to your screens. Numbering pages will make your mockup more organized for you. You need to understand your user behavior and number the page accordingly. You can mark page 1 of the screen that a user first sees in your application. So, do not repeat these mistakes while making your application mockup.

Find an experienced Android app development company that helps you develop an application. If app developers hold years of experience in the field, you will get numerous choices for your businesses. Usawebdzines is a renowned company, and it has a team of expert developers for your project. Please contact us for more details. 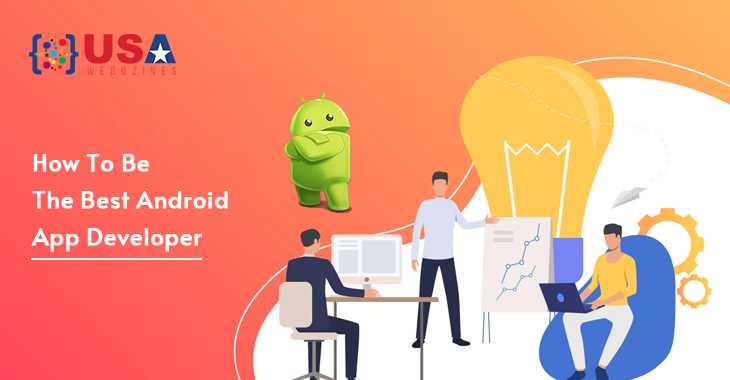 If you want to be an exceptional app developer, you have to fill up the basic requirements. Remember that developing an android application is attached to awakening your logical mind and using your technical knowledge. If you want to develop a mobile application for a client, you have to meet the requirements of the business. Following others will not be helpful. Make a unique application employing your intelligent and make a position for yourself.

The companies that hire app developers are looking for certain basic skills mentioned below:

When it comes to the knowledge and skills of programming language, they must learn Java and Kotlin. As you know the field of android app development gets challenging, you need to come up with unique ideas. The competition is strict and people need the best android app developer.

You can apply for Google’s Associate Android Developer certification. It tests the skills of an entry-level android app development. It also includes a coding project that you need to complete. There is also an interview process. In this certification process, developers use the latest version of Android Studio.

If you want to be an Android app developer, you have to earn knowledge of different designing essence. Many businesses are built on varied demands and you, as a developer, have to identify them. Many companies are in need of Google Android App developers. Get the best opportunity with this.

Usawebdzines is a renowned company for android app development. we are offering the services for every business. With the best team of app developers, we become the leading name in the field. 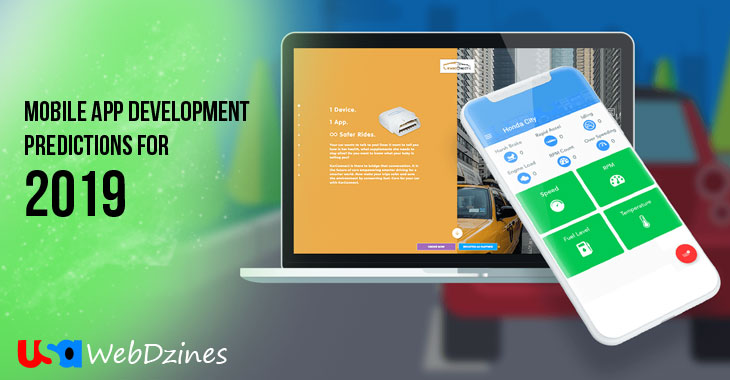 Mobile app development technologies have gone a long way. Innovative introductions help developers to design applications easily and efficiently. With creative thoughts and the use of the latest technological development, developers work on user interface. The year 2018 has come up with some great achievements from the technological perspective. Developers are also eyeing on the extended use of these technologies in 2019. They predict some of the facts which will change the entire app development world. Here are the most important ones mentioned below.

Voice command has already raised the expectation of developers as well as users. The technology helps people control their system through their voice commands. You can easily perform a task on your device by giving it a command. So, this innovative idea was grabbed by big companies and Google also got appreciation with its Assistance feature.

In 2019, developers will give more importance to the voice commands and will consider it a major factor for designing. It will change the user interface designing system and will bring a new way for the development. Mobile app development services include this voice command option to offer a user-friendly feature for your websites.

Chatbots are specially designed for improving the customer care facility. If a company uses chatbots, it ensures a faster customer care service at low cost. But sometimes, it makes customer irritated. Simple chatbots are limited to their work, while the complex ones cost you high.

Chatbots are gaining popularity every day. The e-commerce industry has identified the benefits of using chatbots and every company is also setting up an environment for this option. It can easily be integrated into your application to improve the customer service facility.

If anything holds the highest interactive level among the technological improvements, it is the augmented reality. It erases the thin line between the real and virtual world. While the development of the technology includes the complex thoughts because it works on the real-time environment, its implication is really huge.

Mobile app developers are using the augmented reality and sensors at a great level to make their application attractive and innovative. Since developers adopt the thought widely, it holds a bright future in 2019.

Many a time, developers get themselves in confusion for adding multithreading feature for their development. With this introduction, the app development becomes easier.

We use cookies on our website to give you the most relevant experience by remembering your preferences and repeat visits. By clicking “Accept”, you consent to the use of ALL the cookies.
Cookie settingsACCEPT
Manage consent

This website uses cookies to improve your experience while you navigate through the website. Out of these, the cookies that are categorized as necessary are stored on your browser as they are essential for the working of basic functionalities of the website. We also use third-party cookies that help us analyze and understand how you use this website. These cookies will be stored in your browser only with your consent. You also have the option to opt-out of these cookies. But opting out of some of these cookies may affect your browsing experience.
Necessary Always Enabled
Necessary cookies are absolutely essential for the website to function properly. These cookies ensure basic functionalities and security features of the website, anonymously.
Functional
Functional cookies help to perform certain functionalities like sharing the content of the website on social media platforms, collect feedbacks, and other third-party features.
Performance
Performance cookies are used to understand and analyze the key performance indexes of the website which helps in delivering a better user experience for the visitors.
Analytics
Analytical cookies are used to understand how visitors interact with the website. These cookies help provide information on metrics the number of visitors, bounce rate, traffic source, etc.
Advertisement
Advertisement cookies are used to provide visitors with relevant ads and marketing campaigns. These cookies track visitors across websites and collect information to provide customized ads.
Others
Other uncategorized cookies are those that are being analyzed and have not been classified into a category as yet.
SAVE & ACCEPT